home Bitcoin Ethereum Is Poised to Surge Above $300 By the End of June, Top Trader Asserts
Share this...

As of June 1st, Ethereum was up 25% in the past week alone. But right on cue, the cryptocurrency market saw a harsh correction on Tuesday morning that wiped out the gains seen on Monday.

Bitcoin crashed $1,500 in three minutes on BitMEX, while other cryptocurrencies such as ETH experienced losses in their own markets. This was a drop that took the wind out of the cryptocurrency market’s proverbial sails.

John Bollinger, a prominent technical analyst known for making the indicator the “Bollinger bands,” said that Bitcoin investors should be cautious at current prices:

“The is a Head Fake at the upper Bollinger Band for $btcusd, time to be cautious or short.”

The is a Head Fake at the upper Bollinger Band for $btcusd, time to be cautious or short.

Despite this, some remain optimistic about cryptocurrencies, Ethereum especially.

Ethereum is primed to fall towards the low-$200s after today’s correction but is still on track to hit $300 by the end of June according to a top analyst.

The analyst in question shared the chart below illustrating that ETH recently saw a textbook break out of a symmetrical triangle, showing the trend is still positive: 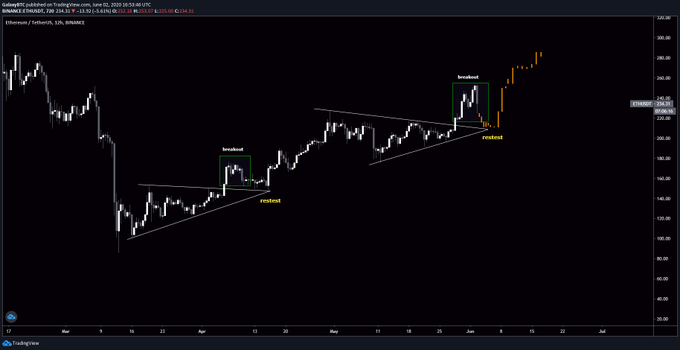 Ethereum price chart and outlook shared by prominent trader “Galaxy,” who goes by @GalaxyBTC on Twitter.

Another trader shared the optimism, writing:

“Things not looking that bad right now, would be nice if we could see a retest of the $220 level before we continue higher as we have not even validated it as support. Even with today’s pretty harsh selloff, this structure is still remaining as bullish for now.”

Reasons to Be Bullish on ETH

There is a confluence of fundamentals corroborating the widely bullish sentiment investors have about Ethereum.

As reported by NewsBTC previously, Defipulse.com shared that there is now over $900 million worth of assets locked in DeFi applications.

It’s a trend that shows DeFi is growing, and as a result, so should Ethereum. The founder of Ethereum-based app MakerDAO said:

“4 million Dai was just minted with WBTC in a single transaction. This really showcases the latent demand for non-ETH assets, and it’s the beginning of a broader trend of DeFi acting as an economic vacuum that will eventually attract almost all value to the Ethereum blockchain.”

Adding to the expectations of ETH upside is an analysis by the founder of Mythos Capital, Ryan Sean Adams.

He wrote that the asset is “doubly” undervalued, noting that the transaction fees collected by Ethereum miners have recently spiked.

This is relevant because according to Adams, the price of ETH has been closely correlated with the transaction fees collected for the past five years.